Anton is a second year International Business Administration student and has been an active STAR member for over a year. Let’s ask him about his experiences with the RSM STAR Case Club!

What was your first experience with STAR?

As most RSM students, I first noticed STAR during the Eurekaweek. While already being a great choice because of the financial benefits, I soon understood the breadth of further opportunities it offers. I could have not made a better choice when becoming part of the Case Club, a flagship of STAR, in my first year of studies.

What is the RSM STAR Case Club?

The Case Club provides consultancy training with the goal of winning international case competitions, a setting in which teams of four solve and present real-life business cases that are written by company professionals. When joining, I was stunned by the connections this STAR flagship has. Frequently, the Case Club solves cases for companies such as Coca Cola, Netflix, Nintendo or PSG. Further, there are trainings with professionals from industry-leading companies such as Bain’s Company or EY.

How do you enjoy being part of the Case Club?

To me, being part of the Case Club means much more than just a steep learning curve. I met a lot of likeminded people and realized that it is almost impossible not to make new friends, especially considering the frequent social events.

To take my involvement to the next level, I joined the Case Club board in my second year of studies. Seeing the bigger picture and being engaged in close collaboration with the main STAR board are just two of the many factors making this position more than worthwhile!

What is your favorite memory of STAR?

Being responsible for the Case Club recruitment, I joined the STAR board during the Eurekaweek and helped representing the association. Meeting new students, presenting in front of large audiences and enjoying a couple beers in between made this week an unforgettable experience! 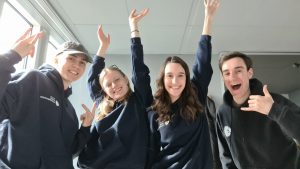